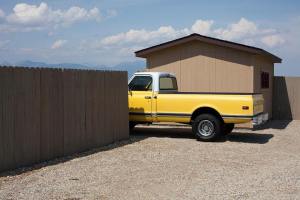 Ormond Studios is delighted to be the venue for the launch of Garry Loughlin’s new book ‘Between Spaces’ featuring landscape and portrait photographs taken in 2013 when Garry decided to cycle nearly 8000km from New York to San Francisco, which took a period of 6 months.

“In 2013, I decided to cycle nearly 8000km from New York to San Francisco, which took a period of 6 months. This was a conscious decision which I hoped would afford me the time to develop new lines of investigation within my practice. Whilst there is a photography tradition of documenting the American road trip, I felt that traveling by bike would expose me to opportunities and encounters that could be overlooked if travelled by car or bus. Taking a slower pace and being on my own speed allowed me, as an observer passing through small American towns, to see the beauty in the banality of everyday life. I feel the decision to cycle not only gave me a stronger connection the landscape but also to the people I met along the way.

“Between Spaces” is series of both landscape and portrait photographs which were taken on this journey. The book consists of 50 colour images and is offset printed with a limited run of 300.

The book launch will take place in Ormond Studios on Wednesday 17th at 6pm.