The displayed images are part of a larger series of images that explores the micro materiality of both the spoken and written word. The series takes text from Virginia Woolf’s novel To the Lighthouse as a kind of ‘ready made’, photographing extracts that explore the correspondence and contextualization of individual particles within larger groups and swarms (gnats, atoms, starlings etc). Pages from the printed novel, held up to the light and photographed with a macro lens, examine the materiality of the printed text and the fibres of the paper, revealing its transparent, tissue-like quality. The reverse side of the page becomes visible, allowing for a non-linear reading; the integrity of the textual passages becomes fractured and atomized, emphasising the minute constituent particles within the paper’s surface. The material aligns with the semantic content of the words.

The series also features photograms of blown-glass pieces (placed on photosensitive paper in a darkroom and exposed to light). The resulting images make visible the refraction of light through these amorphous transparent objects. Spoken excerpts from Woolf’s novel were used in the process of the glass-blowing, whereby the objects index the physicality of the act of utterance. The objects are shaped by the plosive words, lung capacity, oral cavity and body of the speaker, capturing the corporeal dissipation of energy, air and atoms bound up in spoken communication.

The artist explores what it is that defines an art object through questioning how we categorise artwork by considering fabrication and situational context. Both exhibited artworks are forever fraudulent as they attempt to be considered as painting without using any paint. Tubular Intention, cast from water pipes looks to examine painting through 3d composition and arrangement. While its fellow rebel, Mineral Tonics I, made from a rectangular cast attempts to resemble a hanging painting. Both artworks feature the use of a cylinder split in half, suggesting a mode of incomplete transition as they sit awkwardly in-between the act of painting and sculpture.

Multiple glass sheets are propped against the wall. Graphite lines the edges of the glass, positioning the drawing on the border of the pictorial plane. The carbon based graphite focuses the attention on the limit. Light, shadow and reflections interact with the clear glass surface, a material that is both fragile and durable. This installation speaks about thresholds and liminal spaces between materials and dimensions. It also brings to mind borders between sea and land and between different nations. 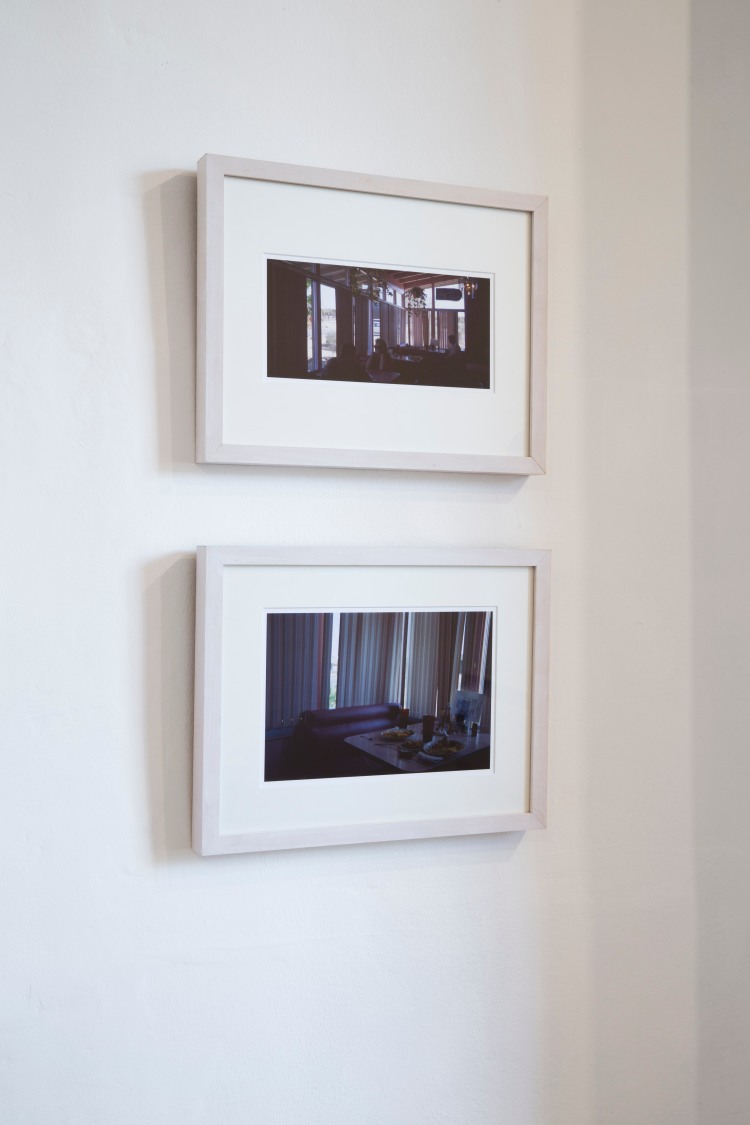 California dreaming in an archetypal American diner in the town of Joshua Tree. A woman sits lost in thought whilst a couple’s dinner goes cold as they step outside for a cigarette. In her photographic practice, Brennan has always looked for that place where people go to in their thoughts, that moment in between when they are unaware of the camera. She seeks to capture a profound moment, a moment of vulnerability and pathos. She endeavours to arrest a moment in time, and in that process elevating that moment to a higher value or meaning. 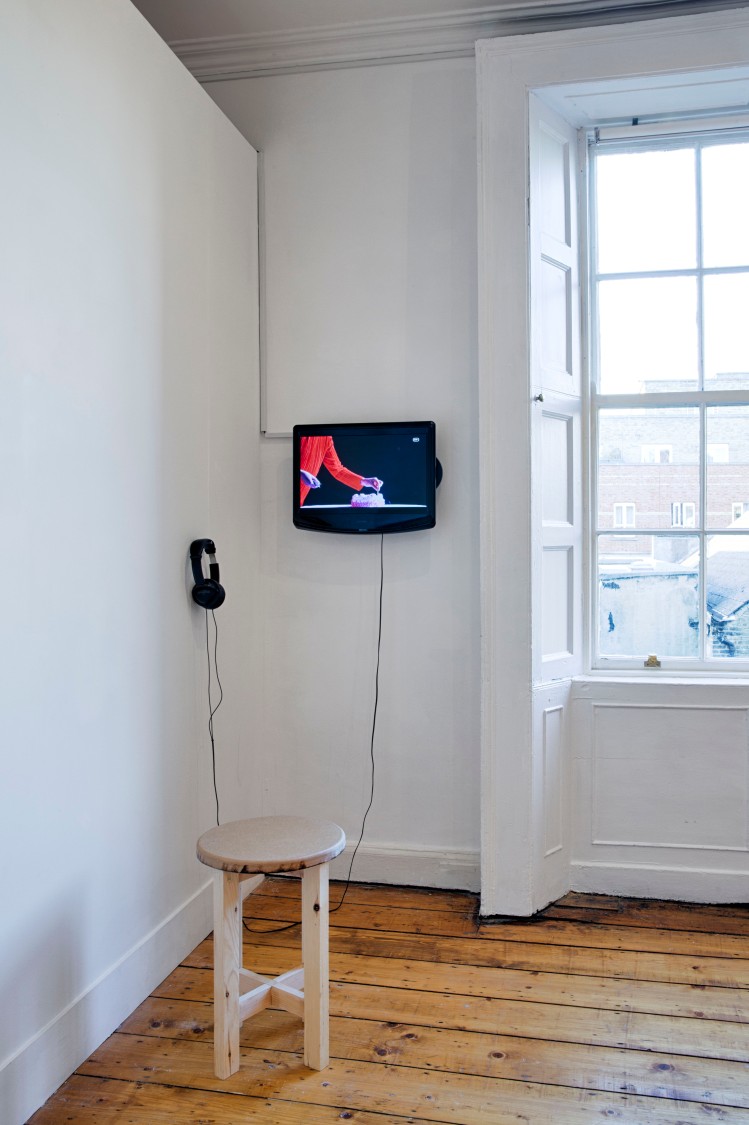 XXXII is a video piece in which the artist, dressed in the likeness of Jesus as seen in Caravaggio’s Supper at Emmaus, continuously blows out candles on her 32nd birthday cake, her last birthday still ‘younger than Jesus’. Her frustration visibly increasing as the candles continue to relight is a metaphor for the pressure she feels due to the age expectations placed on her by society; success, motherhood, income etc. Inspiration is drawn from the term ‘social clock’ coined by the American psychologist Bernice Neugarten which debunked the idea of a biological clock determining age. Instead, she theorised that there was a social clock determining the ‘correct’ time for marriage, childbearing and academic success.

The artist shows you the unsuccessful filming of XXXII, including the accidental interruption of the performance by her boyfriend. The inclusion of their conversation gives an insight into the artist’s domestic life and the many roles that she plays, allowing them to seep into the frame. It is a raw account of the reality of life as an artist, the vulnerability and frustration that are often experienced through the making and showing of work, and the many failed attempts that are endured during the process.

By not planning the outcome, I hope to achieve the same coherence and objectivity that a random slice of nature (or a readymade) always posses – Gerhard Richter

The Ice Paintings are painted with melting ice. The aim is to capture traces of the patterns which nature leaves in its path without any interference. Borowa only prepares the conditions where the image can be developed. The cycle is a part of her recent experiments which also include: Rainy Paintings and Wave Paintings. All of them are based on the reactions which are unleashed when mixing water and oil paints where chemistry separates the pigments. The process of painting has become the starting point for all the artist’s recent works. Her paintings become a place between accident and design, between acceptance and destruction. She does not have a preconceived image and this freedom allows her to accept the way the paint flows. She also works with the painting’s own radiance and limits herself by normally using only one paint and by manipulating the natural light of white primed canvas.

This work draws on notions of reverie, the etymology of which includes the meaning ‘to behave wildly, to frolic, to dream, wander. Wild conduct and raving delirium’. Depicted are scenes of apparent mayhem performed by leaky, oozing, hairy subjects. Fleshsuits are mended and ironed. Teeth are yanked out and collected from the recently beheaded. Endless Russian doll replicas are discovered inside bodies. The installation ridicules the absurd and arbitrary ways queer and female relationships and sexualities can be portrayed. These fictions aim to disrupt and expose the fetishised and commodified existing narratives surrounding queer and female bodies.

Centring around three plaster models, the objects and materials in this work are stacked and suspended to explore scale, weight, balance. This work draws on the degrees of abstraction, separation and distance present in the design of spaces. The work is part of a wider series that weighs fixed architectural designs against material conditions of contingency and threatened collapse. This piece seeks to activate these models through spatial relations and harboured energies. Informed by an imagined space of an architect’s office, it asks what influence this space has beyond its own boundary; examining the ideology of creative solutions, future blueprints, and their outward extensions.

Ormond Art Studios is an artist-led initiative in Dublin city and is a platform for emerging visual artists. It supports the development of arts practice through affordable studio provision, critical discourse and space for events, residencies and exhibitions. The physical studios consists of eight individual artist's spaces along with a separate area that serves as the Project Space. The Project Space offers scope for work on a larger scale, embodied practice and experimentation. It is in this space that feedback sessions, events and exhibitions happen. We believe that critical discourse is hugely beneficial to developing a professional arts practice and essential to a dynamic arts community. Ormond Art Studios encourages members to open up their practise to peer critique and facilitates lively feedback sessions, residencies, and information/skills sharing initiatives. We believe in collaboration and connect with other creative initiatives to develop a network of support for artist‐led endeavours in Dublin and beyond. For more information please contact us at ormondartists@gmail.com Ormond Art Studios is kindly supported by the Arts Council of Ireland. View more posts